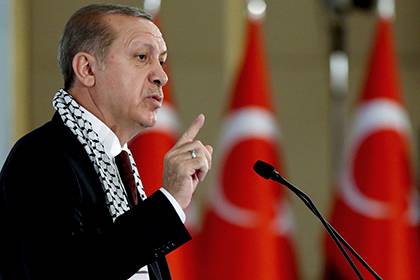 Turkish army launched a military operation in Syria to put an end to the rule of the President of the Arab Republic Bashar al-Assad. This was stated by Turkish leader Recep Tayyip Erdogan, according to Reuters.

“We don’t want Syrian land (…). We are there to restore justice and to put an end to the domination of a cruel tyrant Assad, which supports state terror,” Erdogan said.

On 26 November it was reported that Russian President Vladimir Putin held a telephone conversation with Erdogan during which the two leaders continued exchanging opinions on the situation in Syria, said in an official statement.

A month earlier, Erdogan announced the promotion of the Turkish army in the direction Manuja and Raqqa.

On August 24, the Turkish Armed forces with the participation of soldiers of the Syrian free army (FSA) carried out an operation “shield of the Euphrates”. Its main declared goal is the liberation of the border areas from the extremists of the “Islamic state” (banned in Russia) and fighters of the Kurdish militia, and the establishment in those areas of the security zones. In October, the Turkish military reported that they managed to clear extremists from the area of 1.24 million square kilometers.