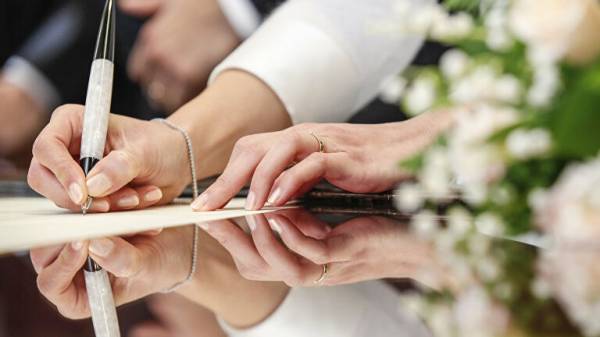 The resolution came into force from the moment of publication, on Monday.

The document, in particular, states that those wishing to marry can ask to hold the ceremony in a solemn atmosphere, choosing an available date and time. The wedding is held in the hall of ceremonies, where the flag and coat of arms of Russia should be located. The event assumes the existence of a scenario for its holding.

The resolution also describes the rules of conduct of the participants of the ceremony. “During the marriage ceremony in a solemn atmosphere in the premises of the registry office is not allowed: loud conversations (including on the phone), exclamations, laughter,” the document says.

It is also forbidden to be in dirty shoes, outerwear and with large bags in the hall of ceremonies. The participants of the ceremony are not allowed to walk around the hall, eat, smoke, drink alcohol, as well as “rearrange pieces of furniture, flower arrangements.”

The maximum time allowed for the marriage ceremony in a solemn atmosphere is 40 minutes.