Us President Barack Obama during his last as the US President’s European tour arrived in Germany. In the Berlin airport, he was greeted with the highest honors: red carpet and an honor guard.   After shaking hands with the military and his counterpart Joachim Gauck, whose term also comes to an end, Obama limousine went to the center of the capital of Germany, where already in the morning taken unprecedented security measures.   The sky over Berlin is closed for flights to Central metro station not working, on every street guarded by reinforced police squads, and on the roofs, there are snipers. Residents adjacent to the hotel Adlon houses, where he stopped Obama, intelligence agencies are forbidden to open the Windows.   Thursday, November 17, American President right in the hotel will meet with Chancellor Angela Merkel on Friday, November 18, is scheduled to meet with other European leaders: heads

END_OF_DOCUMENT_TOKEN_TO_BE_REPLACED

Media explained the impossibility of sending the speaker in jail The investigation seeks house arrest Ulyukayev, as Minister of posts admitted to state secrets and cannot be sent in a regular detention facility. The refusal of the Investigative Committee of Russia (TFR) to seek custody of the Minister of economic development Alexei Ulyukayev, who is accused of bribe extortion in especially large size, due to the inability of the premises to the camera person having access to state secrets of the highest level, reports “RIA Novosti”, citing a source in law enforcement bodies. TFR asked the court to send the speaker under house arrest. “This measure was chosen because the speaker, as one of the Ministers, has access to a variety of state secrets of the highest level. Therefore, in a normal prison, and especially in the General population, it can not be placed. In such cases, at the discretion

END_OF_DOCUMENT_TOKEN_TO_BE_REPLACED

A symbol of New year in Russia adopted the Tambov wolf A symbol of New year in Russia officially approved Tambov wolf. It is reported portal “the Notebook”. The choice of this mascot is that the capital of the festival this year will be Tambov. The author of the logo was a local artist Olga Solovieva. The image of the animal is framed by snowflakes. The main character is so cheerful and really warm. He smiles, as if inviting tourists to the many Christmas holidays in the capital.The administration of Tambov region New year’s eve event will start at city on 10 December. On this day at the Palace of sports “Crystal” will open a five-meter ice sculpture of a wolf. It will also feature postcards. Christmas capital of 2017-2018 will be in Khanty-Mansiysk. In 2016, the main city of Russia for the period of the winter holidays decided to

END_OF_DOCUMENT_TOKEN_TO_BE_REPLACED

Clinton is ahead of trump by a million votes Lost the election the candidate in US presidents from Democratic party Hillary Clinton was ahead of his opponent, Republican Donald trump, according to the votes. On Tuesday, November 15, reports Politico, citing the results of the preliminary counting of ballots. 9фотографий9фотографий9фотографий For former Secretary of state voted 61,963,234 people, while billionaire supported 60,961,185 voters. As noted, the counting process is not yet completed in the States of California, Utah, Washington, and Michigan. See alsoTony Blair called the election trump President of the United States “strange situation” This is the fifth in the history of the United States when the winner gets less votes than the loser. The last time this happened in 2000, when the President was Republican George W. Bush, far behind rival al Gore by half a percent. The final counting of votes then dragged on for months. 12

END_OF_DOCUMENT_TOKEN_TO_BE_REPLACED Prime Minister of Russia Dmitry Medvedev proposed to rename the coffee “American” in “rusiano”. With the corresponding initiative of the head of the government spoke on Wednesday, November 16, at the session of the Eurasian intergovernmental Council, reports RIA Novosti in Moscow. Medvedev, speaking with Belarusian colleagues, praised them for their constructive behavior, the Belarusian Prime Minister Andrei Kobyakov said that helped him in this coffee. “[Kobyakov] says, give me Americano. It is generally politically incorrect it sounds. Let us rename!” — said Medvedev, as an alternative suggesting the word “rusiano”. In November 2014 it was reported that the owners of some Crimean café refused to use the menu to name coffee “American.” In particular, in one of the institutions appeared the following announcement: “Attention! In connection with the unstable geopolitical situation we have no coffee under the name “American.” Ask coffee “Crimea””. In some of the coffee machines button

END_OF_DOCUMENT_TOKEN_TO_BE_REPLACED 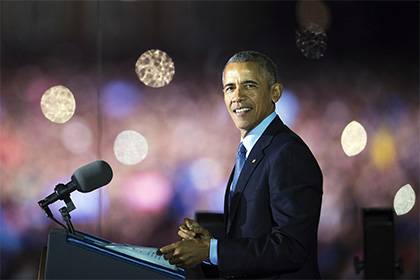 Barack Obama European leaders and U.S. President Barack Obama will discuss on Friday, November 18, the question of extending sanctions against Russia over its “intervention” in Ukrainian Affairs and possible new sanctions for bombing in Syria. About it reports Reuters, citing a number of sources. Meeting in Berlin organised by Chancellor Angela Merkel, will take place a few days after the victory of Republican Donald trump for President in America. It will also be attended by the leaders of Britain, France, Italy and Spain. The German official said that the agenda of the meeting envisages negotiation in the coming weeks, the issue of extending sanctions of the EU against Russia, which expire at the end of January 2017. “We are in a very critical situation,” said the German official. “We must prevent a situation where EU prolongs sanctions, and then the new US President comes in and removes them,” he

END_OF_DOCUMENT_TOKEN_TO_BE_REPLACED

The President of Ukraine Petro Poroshenko said that tests of new rockets of Ukrainian production were successful. The head of state on his page on Facebook wrote that the missile demonstrated its high precision. Thus, according to the Ukrainian leader, firing range for new weapons was 60 kilometers.   Poroshenko did not specify what kind of model rocket question.   Informed about the trial “scary accurate Ukrainian weapons,” said the adviser of the President of Ukraine Yuri Biryukov.   “We know how to make missiles,” – he wrote on his page on the social network, posting a video of the polygon.   In October 2016 Petro Poroshenko has shared plans to create in Ukraine a new missile weapons, means of reconnaissance and combat drones. However, military experts ridiculed these statements of the Ukrainian leader. Photo: Yury Biryukov/Facebook

END_OF_DOCUMENT_TOKEN_TO_BE_REPLACED

Hawking has called the exact date of the end of the world British scientist Stephen Hawking has predicted the imminent end of the world in the next thousand years. The corresponding statement he made during a speech at the student debating society of Oxford. His words are quoted by The Daily Mail. The famous physicist believe that life on Earth will disappear in the force of nuclear war, the activities of artificial intelligence or genetically engineered virus. Hawking has traditionally urged people to flee from the planet and noted the need to create advanced technologies for long-distance space travel. In addition, the researcher stated that for the last 50 years science has moved forward, and mankind was closer to understanding the Universe. The Hawking expressed his joy that was involved in the creation of a number of theories. Finally, the scientist hoped that in the near future, researchers will be