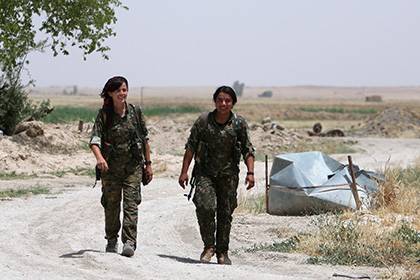 U.S.-backed Alliance of Kurdish and Arab armed groups “of the Democratic forces of Syria” (DSS) has rejected the participation of Turkey in operations for the liberation of Raqqa. About it reports Reuters.

“DSS are the only force that will take part in the operation to liberate Raqqa”, — said the press-Secretary of the organization Talal Silo.

He also said that reported US and coalition allies.

On October 27 of this year, President Recep Tayyip Erdogan announced an offensive of the armed forces in Manbij and Raqqa after liberating the city of al-Bab terrorists from grouping “Islamic state” (IG, is prohibited in Russia). Thus, the Turkish leader stressed that agreed on this initiative with US President Barack Obama.

A day earlier, foreign Minister Mevlut Cavusoglu said about the negative attitude of Ankara to participate to the Kurdish troops in the assault on Raqqa.

Raqqa is a city in Northern Syria, located 160 kilometers East of Aleppo. In March 2013, was captured by militants and later proclaimed the capital of terrorists. In March of 2016, the residents of several neighborhoods of the city revolted. Militia managed to destroy a large number of militants, but the terrorists managed to suppress the rebellion.

Since the end of August this year, the armed forces of Turkey with the participation of formations of the free Syrian army (FSA) carried out an operation “shield of the Euphrates”. The main stated purpose of the mission — the liberation of the border areas from the extremists ISIS fighters and Kurdish militia, and the establishment in those areas of the security zones.