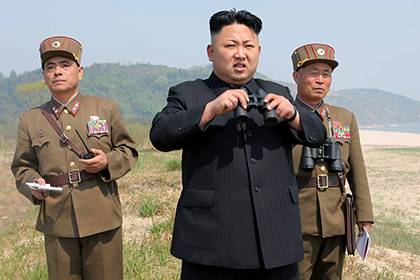 North Korea rejected the statement of NATO, which has demanded Pyongyang to abandon its missile and nuclear programs. This is stated in the statement of the KCNA, quotes of which leads TASS.

North Korea has caused confusion is the fact that NATO, “the official whose function is to ensure security in the North Atlantic region, poking his nose into the Affairs of the Korean Peninsula”.

As noted in Pyongyang, proposing such a requirement, “NATO proved that this military-political bloc has become a puppet of the United States”. In addition, in the opinion of management of the DPRK, “it plays into the hands of the South Korean regime of Park Geun-Hye, who is living its last days.”

The statement highlights the “complete incompetence” of NATO strategists in the Affairs of the Korean Peninsula. “This organization is now playing the role of a tool that undermines international peace and security,” the document says.

According to KCNA, the governing body of NATO, North Atlantic Council, at its meeting on 15 December approved a statement condemning the missile and nuclear program of the DPRK. It was noted that Pyongyang’s actions in this area, “violate international norms, the relevant resolutions of the UN Security Council, are a challenge to the nonproliferation regime”.

On 6 January, the DPRK conducted another nuclear test, and on 7 February launched a carrier rocket with the artificial companion of the Earth, thus violating the resolutions of the UN security Council. Then, in response, SB has also tightened sanctions against the DPRK.

Pyongyang insisted that it had conducted a nuclear test for self-defence in the backdrop of aggressive U.S. policy in his address, and the purpose of the launch of the carrier rocket was peaceful space exploration, and did not recognize the document.