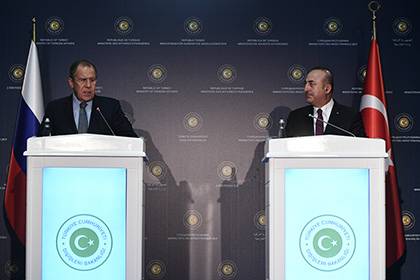 The Minister of foreign Affairs of Russia Sergey Lavrov after the assassination of the Turkish Ambassador Andrey Karlov held a telephone conversation with Turkish counterpart Mevlut Cavusoglu, who arrived in Moscow to participate in a trilateral Ministerial meeting of the Russia-Iran-Turkey. This was reported on the website of the Russian foreign Ministry.

The Turkish Minister after President Recep Tayyip Erdogan, who held a conversation with Russian President Vladimir Putin expressed deep condolences in connection with the attack, which caused the death of a diplomat.

“The Ministers confirmed their intention to make greater efforts to effectively counter the terrorist threat, to exclude the possibility of the success of provocations, no matter where they come from, aimed at undermining the progressive development of Russian-Turkish relations, cooperation between the two countries in combating terrorism in Syria and Iraq,” the statement reads.

According to Cavusoglu, the crime was directed against the mutual actions of Russia and Turkey to resolve the situation in Syria and rescue the civilian population, reports RIA Novosti. “Knowing that we will make every effort to prevent this. Will not allow this event to affect our relationship, on our solidarity in the fight against terrorism, first and foremost with terrorist organizations,” Cavusoglu told reporters in Moscow on the night of Tuesday, December 20.

Charles was killed on Monday, December 19, at the Gallery of modern art in Ankara. Police officer mevlüt MERT Altıntaş shot in the back by 62-year-old diplomat, when he spoke at the opening of the photo exhibition “Russia through the eyes of the Turks,” and was soon eliminated by the security forces. Apart from the Ambassador injured three people, Russians among them.

In Ankara on behalf of Putin will fly an interdepartmental working group from Russia to investigate the circumstances of the crime.