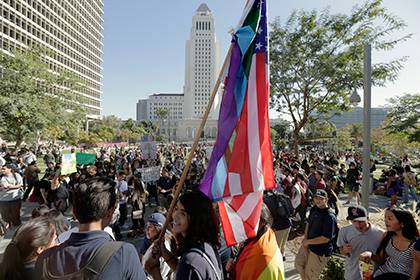 In California, held a protest demonstration against the elected President of Donald trump on the eve of voting the electoral College. About it reports Reuters.

About two thousand people, dissatisfied with the rhetoric and program of the Republican, were held in Los Angeles. The March is timed to two events: the International migrants day celebrated on December 18 and the upcoming vote of the electoral College. People carried placards “Stop the trump”, “Refugees welcome” and “Make America again thinking”. “I would like to explain to Mr. Trump that we are immigrants, we help the economy grow and don’t demand anything for free,” said one of the protesters.

At the election of the President of the United States on 8 November in California with big advantage won by Hillary Clinton. It also is ahead of trump by almost two million votes nationwide, but due to the peculiarities of the American electoral system Trump was able to get a majority in the electoral College, which ultimately elects the head of state.

The vote of the electors must pass Monday, December 19. In recent times has increased the pressure on them. Many opponents of trump believe that even the electors from those States where he won, should vote either for his main rival Democrat Hillary Clinton, or any other representative of the Republican party.

Disputes about how to vote to the electors, brought to the attention of judicial authorities. Earlier, the court in Denver ruled that all members of the electoral College from the state of Colorado are required to vote for the candidate who won the US presidential election in this state, namely, Clinton. Two of the nine members of the electoral College have tried in court to challenge the action of the corresponding state law. The plaintiffs wanted to win the right to vote, not for trump, but for an alternative candidate from the Republicans.

Before that a member of the electoral College from Texas Christopher Suprun refused to support trump on the ballot on December 19.

The U.S. Congress approves the vote of the electors on 6 January 2017. The inauguration of the newly elected President is scheduled for January 20.