In Warsaw at the presidential Palace, is mass protest

The meeting held in connection with the situation that prevailed on the eve in the Polish Sejm, which passed the several laws, despite the fact that the opposition MPs took the podium and interrupted the session. 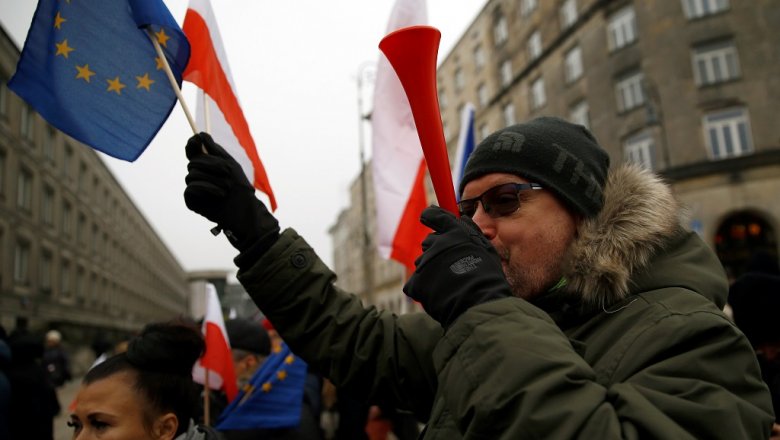 WARSAW, 17 Dec — RIA Novosti. Several thousand people take part in a protest at the presidential Palace in Warsaw, the correspondent of RIA Novosti.

Kaczynski left the building of the Parliament, accompanied by a police escort

The meeting held in connection with the situation that prevailed on the eve in the Polish Sejm. Opposition MPs because of the removal of one of the supporters of the “Civic platform” from participation in the meeting of the lower house of Parliament took the podium and interrupted the session.

The speaker of the Sejm was forced to announce a break, and then convened a meeting in another room, where the deputies, despite the absence of an electronic voting system, adopted several laws.

The opposition believes the adoption of illegitimate laws, on Friday evening in front of the Sejm were organized the protest, which lasted all night.

Also the grievance of the protesters is the intention of the diet from January 1 to restrict the work of journalists in the building of the Polish Parliament.

The rally at the presidential Palace attended by the supporters of the opposition of the “Committee for the protection of democracy” and the party “Civic platform” and “Nowoczesna”.

“Yesterday, the ruling majority turned the Parliament in the Bureau of one of the party. We do not agree with such methods,” — said during a speech at the rally the leader of the “Committee for the protection of democracy” Mateusz Kiev.

Earlier the interior Minister of Poland Mariusz Blashak called the incident on Friday in the Sejm attempt to seize power by the opposition.

In Warsaw pull together additional forces of police. As reported by the TV channel TVN24, police spokesman Mariusz Charka, an increase is necessary to ensure the safety of anti-government demonstrations.