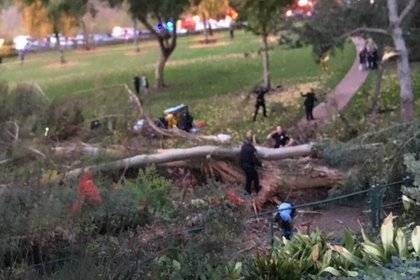 At least one person was killed and five were injured by a falling tree on the participants of the wedding procession. Entry posted on Sunday, December 18, in the microblog in Twitter County fire Department Los Angeles, California, USA.

According to the TV station KTLA, the incident occurred on 17 December at 16:45 local time in Penn Park, city of Whittier near Los Angeles. The celebration was attended by about 20 people. According to witnesses, they stood under a tree to take a picture when a large plant suddenly fell over, covering a few of those present. One of the witnesses to the incident, claims that the tree broke into two parts.

At the scene arrived rescuers and six ambulances, victims assisted, some hospitalized. According to The Seattle Times, the condition of the two wounded men is estimated as heavy, three minor injuries.

The reasons for the fall of wood is not reported, the identity of the deceased and injured are not given.