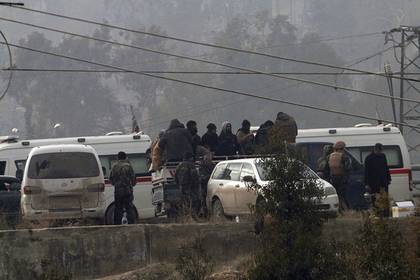 Evacuated from the Syrian city of Aleppo people located in the province of Idlib, which borders Turkey. It is reported by Anadolu.

The head of the Turkish red Crescent branches Kerem Kınık said that the planned construction of a camp for 10 thousand tents. “The first phase of work (…) will take three to four days. In this regard, has already prepared the corresponding infrastructure”, he said.

In turn, the Reuters Agency reports that Turkish experts have begun to prepare the two sites for the creation of refugee camps that accommodate 80 thousand people.

Previously, on 16 December, soldiers loyal to the Syrian government militia reported that all areas of Eastern Aleppo liberated from the militants.

This information was confirmed at the Russian Centre of reconciliation of the warring parties. There’s also said that the operation to withdraw from the Eastern districts of Aleppo of the militants and their family members completed. In total areas, which is controlled by terrorists, exported 9.5 thousand people, including 4,5 thousand fighters.

On 15 December it became known that the Syrian army is the result of offensive drove the militants out of all their controlled districts of Aleppo. According to the Deputy chief of the Main operations Directorate of the General staff Lieutenant-General Viktor Posnaia, was eliminated more than 900 extremists destroyed dozens of pieces of heavy weapons and military equipment. More than three thousand fighters voluntarily resigned from Aleppo, more than half of them pardoned.