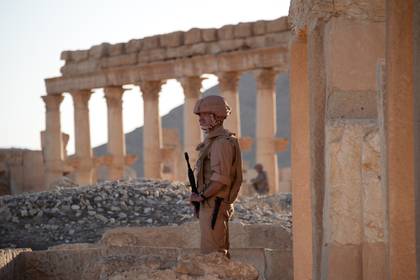 Action grouping “Islamic state” (IG, is prohibited in Russia) established full control over the Syrian city of Tadmor, on the outskirts of which are the ruins of Palmyra. On Sunday, December 11, reports TASS with reference to the channel Al Jazeera.

The Agency said, citing Al Arabiya, also notes that the gang of terrorists broke into the territory of the ancient city. It is noted that they entered from several directions. The soldiers of the Syrian government forces were forced to retreat, but continue to hold the Fort.

In the center of the reconciliation of the warring parties in Syria RIA Novosti stated that the Russian aircraft did not strike at residential areas of the city. “Despite heavy losses in manpower and technology, terrorists strive to get closer and to gain a foothold within the city”, — stated in the message.

Earlier on December 11, the Agency SANA, citing its own correspondent reported that the Syrian government army with the help of Russian troops continues fighting militants in Palmyra and the Eastern province of HOMS. The defense Ministry on the same day, claimed the destruction of over 300 militants who tried to break through to the ancient city.

In March of 2016 to contribute to the support of Navalny was freed Mira from is militants. During the period of occupation has seriously damaged many cultural sites of the city, included in the register of world heritage of UNESCO, including were completely looted the national Museum. Russian experts participated in the demining of the city.