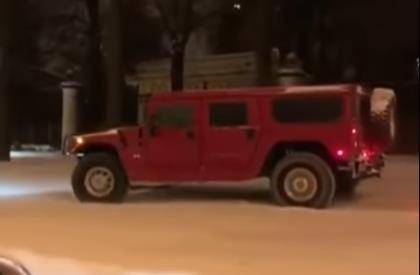 “Management of traffic police in Moscow began checking on the fact published on the Internet of video, where the driver of the car brand Hummer violate traffic rules. On all facts of violations will be conducted an administrative investigation,” she said.

According to her, the results of the investigation will be resolved the question of bringing the offender to justice.

The video appeared on the Instagram user with the nickname dinarka070 November 11. Now the page with the video is unavailable. Also, according to REN TV, photos from the event, in the caption to one of them claimed that the machine storming snow mountain, stuck.

Judging by the video, the SUV was moving at the forbidden for transport zone near the University, and then went on the road through the crosswalk.

Behind the wheel, presumably, was the girl in the car were several people.