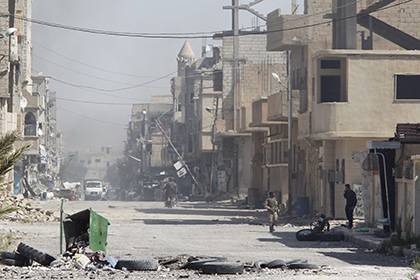 According to him, fierce fighting with ISIS are in the areas of Gazal and Shaer, the extremely intense situation remains on a mountain ridge At-tar. “Army units regrouped and left several heights of this mountain range”, — he said.

In turn, a source in the Syrian people’s militia said that the fighting outside the borders of Palmyra. “Historic Palmyra is still under the control of the army. Today and yesterday we have together repulsed a number of powerful attacks on the city. The terrorists are trying to storm it from several directions”, — he said.

Earlier it was reported that as a result of coordinated attacks by extremists managed to capture a few settlements: Qasr al Halabat — South-West of the city, the Jebel Hayan in the Western suburbs, South Savala in the North-East and Havasi in the North-West. The nearest point, where are the militants, located just four kilometers from the administrative border of Palmyra.

In may this year the Syrian armed forces with the help of Russian troops liberated the Palmyra from is militants. Antique Palmyra — a UNESCO world heritage site. During the period of occupation has seriously damaged many cultural sites, including have been completely looted national Museum.

“Islamic state” made in Russia in the list of terrorist organizations, for participation in which provides criminal penalties.