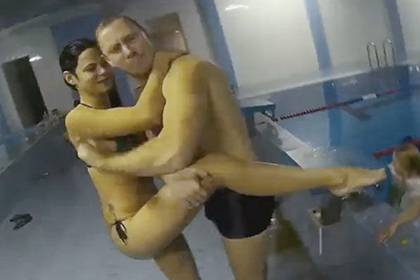 The company of boys and girls took off for the money pool at school № 42 in Vladimir for holding alcoholic party, the TV channel “360”. The scandal erupted after the publication of the relevant videos in the group “Overheard in the residential district Yuryevets” in “Vkontakte” on Saturday, December 3.

According to documents, the event was designed as a health and fitness service. Deal with young people concluded the head teacher of the school. The rental pool for three hours on Saturday, 5 November, cost them 24 thousand rubles.

Employee of the school has warned that the party guests will bring alcohol. In response, she asked not to throw anything in the pool and not put on the Internet pictures with bottles and food. A conversation with an employee of the school, a young man recorded on tape.

“There is a security tape: the school consists of seven guys with a bunch of bags clanking with bottles. Their guard will take to the pool,” told the TV station the author of the video hit the net.

On the day of the publication of the video in the internal Affairs of Vladimir received a statement from the Director of secondary school № 42, which in November was on vacation, with a request to use rented the pool of young people accountable for bullying. “We study all the circumstances, the video and photographs posted on the Internet”, — noted in the text on the website of the city police Department.