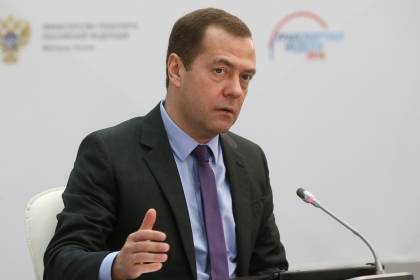 Prime Minister of Russia Dmitry Medvedev instructed the departments to assess the situation with payment of wages and to take measures on repayment of debts. This was reported on the government website on Saturday, December 3.

As noted in the message, in cases where debt is necessary to “make arrangements for repayment, including the application of measures of responsibility for heads of the organizations concerned”. The results of work done by the agencies required to report until January 25, 2017.

Separately Medvedev instructed the government of Zabaykalsky region to pay off in 2016 accumulated debts. The Ministry of labor prior to March 15, 2017 will also need to report on the feasibility of establishing a Fund for the payment of salaries to employees of bankrupt enterprises.

2 December in Moscow opened 30 criminal cases in connection with non-payment of money to employees. The city Prosecutor’s office also reported that wage arrears in the city is 142 million rubles.

On Friday also it became known that the Governor of Transbaikalian edge Natalya Zhdanova brought in regional legislative Assembly the bill, which reduces by 25 percent salary cuts and vacation time officials of the state.