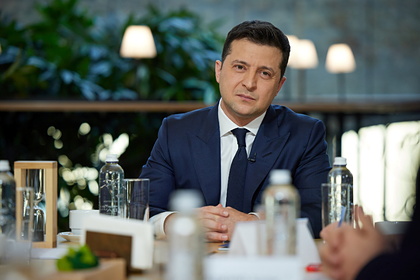 country. According to him, this is the end of the contract with Russia for gas transit in 2025. This was reported on the official website of the Ukrainian leader.

“I think this will be a difficult moment. I believe that we must quickly implement the reform of thermal modernization, ”Zelensky said. According to him, the presidential office and the Ministry of Economy are already working on the preparation of a program for thermal modernization and energy efficiency.

During the same press marathon, Zelenskiy said that Ukraine wants to keep the transit of gas from Russia to Europe after the expiration of the current contract with Gazprom. At the same time, he boasted that in negotiations on the continuation of transit, Kiev had taken a good step by offering a lower price. According to him, Russia did not agree to the offer.

On November 22, Ukrainian Prime Minister Denis Shmygal announced Kiev's intention to seek an extension of the contract with Russia for 15 years. “The contract is valid until 2024. In fact, he is. We wish to extend it and are conducting negotiations on this with our European partners, because the extension of this contract also depends on them, “he noted.

Current agreements on pumping gas through Ukrainian territory until 2024 with the possibility renewals for another ten years were signed in 2019. According to the agreement on the construction of Nord Stream 2, which Germany and the United States reached in July, Russian gas supplies through Ukraine should continue after the launch of the new gas pipeline.