Zakharova: Russia calls on Germany and France to continue the settlement in eastern Ukraine 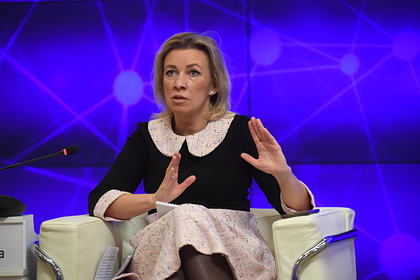 Russia calls on Germany and France to continue joint efforts to restore peaceful life in east of Ukraine. This was stated by the official representative of the Ministry of Foreign Affairs Maria Zakharova. Her words are quoted on the agency's website.

“The Russian side, as a mediator of the peace process, calls on the German and French partners to continue joint efforts aimed at restoring peaceful life in eastern Ukraine,” she said.

“The crisis will come by spring” Zelensky gets rid of political competitors. Why won't this help him to retain power? 17: 26-23 November the aggravation of the situation in Donbass is Russia accused of?

According to Zakharova, the main negotiation format for resolving the conflict in Ukraine is the contact group. She also noted that another mechanism is the “Normandy format”. Its goal is to facilitate the peace process and control the implementation of the Minsk agreements by the parties to the conflict, added the representative of the Russian Foreign Ministry.

Earlier, the press secretary of the delegation of the unrecognized Luhansk People's Republic (LPR) in the negotiations to resolve the conflict in the region, Maria Kovshar on At the end of the meeting, the economic subgroup stated that Kiev is purposefully aggravating the situation in Donbass.

According to her, the Ukrainian authorities refuse to discuss the settlement of the situation, while they are systematically taking steps to aggravate the situation on the line of contact.