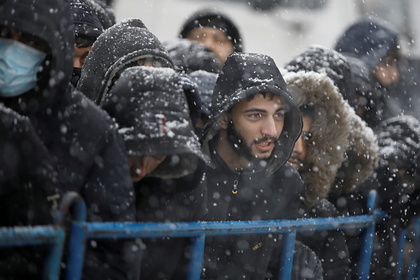 Illegal migrants riot in a guarded center for foreigners. This was reported by RIA Novosti.

According to Polish media reports, hundreds of illegal immigrants in Wenjin came to the site in front of the center building, began to spoil equipment and break glass. At the same time, the migrants shouted “Freedom” and shouted that the purpose of their arrival in Europe is Germany.

Press secretary of the Polish Border Guard Anna Mikhalska also said that illegal immigrants tried to force the fence, but there are double or triple fences so the situation is under control. Negotiations are ongoing with foreigners to calm them down, but this is not easy because of their temperament, in turn, stressed the press secretary of the Nadbuzhani Border Guard Department Ioanna Konechnyak.

It is noted that the center contains 604 foreigners. , among whom the majority are men from Iraq and Afghanistan.

Earlier, Polish President Andrzej Duda said that migrants on the Polish-Belarusian border during assaults very often carry knives, sticks, metal crowbars and tear gas. He accused the Belarusian paramilitary structures of arming illegal immigrants trying to break into the country. The politician said that Warsaw perceives the migration crisis as a provocation and fears the opening of fire on the border from the Belarusian side – by migrants or Belarusian forces. The Polish leader also noted that illegal immigrants changed their tactics and stopped resorting to frontal attacks when they were rushing to border crossings in hundreds and thousands.