In Kiev, the sculpture “Motherland” was proposed to be converted into a monument to the Archangel Michael 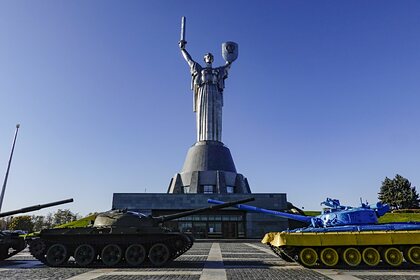 -mother”. A petition with a corresponding initiative was published on the website of the Kiev City Council.

According to Alexander Artyomov, the author of the petition, the original design and Soviet aesthetics of sculpture does not correspond to the “modern political and ideological requirements” of Ukrainian society, and the woman depicted “looks quite masculine. ”

To change this situation, he proposed converting the object into a monument to the Archangel Michael, the patron saint of Kiev. Artyomov noted that for this it would be necessary to remove the chest from the sculpture, replace the Soviet coat of arms with the symbols of the Ukrainian capital, and add wings.

In addition, if there are “additional funds”, the author proposed to make the archangel's wings moveable so that they could sway in the wind.

In 2016, the secretary of the Kiev City Council, Volodymyr Prokopiv, announced that the city authorities intend to preserve the Motherland monument. According to him, within the framework of decommunization, only the USSR coat of arms, which is on its shield, is planned to be removed from the sculpture.