“Canteens” for birds and animals appeared in the Taganai National Park 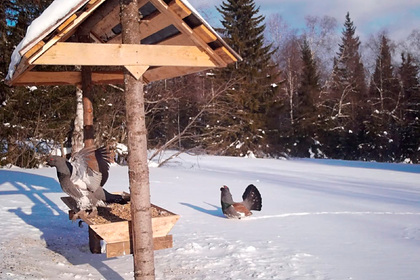 “Canteens »For birds and animals in the open air. This is reported by the UralPress agency.

In total, eight feeding grounds and 48 salt licks have appeared in the national park, two and a half tons of salt, 20 bales of hay, 300 kilograms of oats and 200 kilograms of sunflower seeds will be sent there. The first deliveries have already begun and for almost three weeks now the “canteen” near the Black Rock has been visited by wood grouse.

As explained by the director of Taganay Elvina Novoselova, as soon as the snowdrifts become deep, the food outlets will work in full format.

A supply of sunflower seeds will also be received by all tourist shelters where bird canteens are located – they are visited by tits, jays and nuthatches, and sometimes squirrels.

Earlier it was reported that an observation deck was built in Taganay on the Big Stone River. The press service of the National Park explained that now it is safe to walk there even in winter. The observation deck is not like all previously installed on tourist routes. They tried to fit the structure into the landscape so that it was as invisible as possible and did not distort the view of the natural monument.