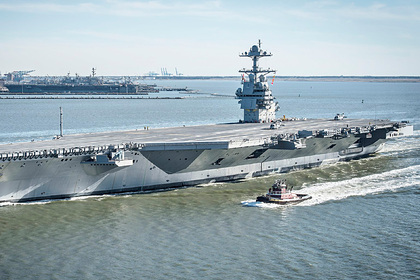 None of the Kennedy parts that were handed over to Gerald R. Ford will affect the timing of the first, he said. These are, in particular, the components of power plants and elevator lifts. Doss called the use of parts originally intended for another ship a “project management tool.” The specialist added that the new ship, capable of propelling the fifth-generation F-35C Lightning II carrier-based fighters, should be ready by 2024.

According to Defense News, the Gerald R. Ford was originally supposed to be in full combat readiness back in 2018, but due to numerous technological difficulties and delays in the supply of components, the final readiness of the ship was postponed. From 2018 to 2021, the cost of an aircraft carrier increased from $ 10.5 billion to $ 13 billion.

Retired US officer Bradley Martin called Kennedy's cannibalization for Gerald R. Ford a bad habit. According to him, these actions of the US Navy are alarming, as they indicate that the Pentagon does not have a reliable source of spare parts for the ship.

In July, Popular Mechanics magazine, citing a statement by the Chief of Naval Operations of the US Navy, Admiral Michael Gildea, said that the US Navy's Gerald R. Ford, the most expensive ship ever built in the world, was overly sophisticated. According to the military, we are talking about 23 technological solutions that create difficulties in the operation of the aircraft carrier.

The Gerald R. Ford provides for the deployment of more than 4.5 thousand military and 75 aircraft. The ship is equipped with medium-range RIM-162 ESSM anti-aircraft missiles, ship-to-air missile and anti-aircraft artillery systems. The aircraft carrier has a displacement of 100 thousand tons, length – 332.8 meters, width – 40.8 meters (waterline), 78 meters (flight deck). The maximum speed is 30 knots. Service life – at least 50 years. Gerald R. Ford received by the US Navy in July 2017.