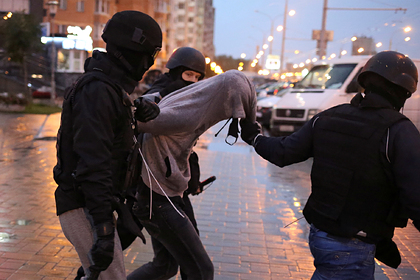 The Belarusian police have identified two types of detainees for extremist activities in the country. According to the head of the department for combating organized crime and corruption, Andrei Parshin, such people are either “mad with fat” or “complete scumbags and marginalized.” The police colonel gave his own typology in an interview with Minskaya Pravda.

“The first type includes those who have already settled well in life. They say about such people: they are mad with fat, they don't know where to put themselves and their money. Such people believe that they know everything better than others, they begin to teach the life of others. The second type includes complete thugs and marginalized people who think that by means of a coup and rebellion they can improve their material condition or take a social elevator, becoming the so-called heroes of the revolution, “Parshin said.

Chronic protest The Belarusian opposition has been taking to the streets for almost six months. How has the country changed during this time? 00:01 – August 9

The colonel of the militia of Belarus is sure that both types appeared due to global digitalization. Foreign intelligence services use the information space to influence the personality of people and gradually nurture terrorists and extremists. “It all starts with comments, and then some IT specialist picks up a gun and kills the employee, cynically filming everything,” sums up Parshin's reasoning.

Searching for extremists in digital channels in Belarus has become an important stage in the fight against “radical persons”. The state security committee of the republic announced the beginning of the operation to cleanse the republic from such persons in the summer. In October, Belarusian police joined the security personnel, threatening to put them in jail for subscribing to certain Telegram channels.

Earlier, in the Mozyr region of Belarus, a teacher, a mother of two minor children, was imprisoned for two years. And on November 22, Belarusian investigators sent a 21-year-old Russian citizen to trial on charges of calling for the seizure of power.