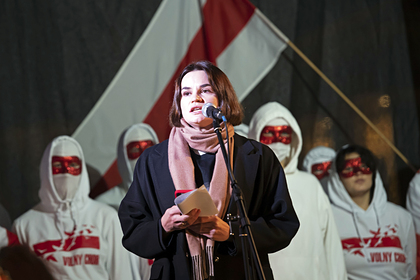 to the official Minsk and in support of the Belarusian people. Former presidential candidate Svetlana Tikhanovskaya made such an appeal from the rostrum of the European Parliament.

According to her, it is necessary to continue to put pressure on the incumbent Belarusian leader Alexander Lukashenko in order to achieve any results in the process of democratizing the Belarusian society. The oppositionist recalled that 882 people in Belarus have already been recognized as political prisoners, and the regime itself uses refugees to blackmail Western countries.

“Have we really forgotten the tragic lessons of European history? That attempts to pander to the tyrant do not calm him down, but only spur him on, ”said Tikhanovskaya. In this regard, the politician also proposed to the EU a strategy to get rid of the “virus of dictatorship” of Lukashenka. In her opinion, the most effective measures will be the diplomatic isolation of Minsk, new sanctions and the expansion of the program of assistance to civil society.

Earlier, Tikhanovskaya urged the foreign ministers of the EU countries to refrain from any contacts with Minsk until the Belarusian authorities release all political prisoners. She also added that she sees no point in interacting with the Lukashenka regime, since he “cannot be trusted”.