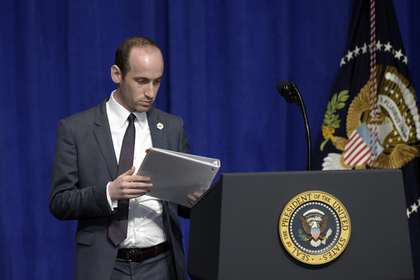 At the White house, there is ample evidence of fraud in the presidential election. About it senior Advisor to Donald trump for political Affairs Steven Miller said in an interview with ABC television aired on 12 February.

“The white house has provided a huge amount of evidence of voter fraud, we are talking about voters and people living in more than one state,” said Miller.

According to him, the recorded part in the procedure of dead people and those who were not American citizens. Voting dead people, people without U.S. citizenship. You will not deny that on elections was the huge number of votes of the people who are not citizens of the country”, — said the Advisor.

Miller called the situation a scandal and added that the United States should be “terrified” due to the fact that the election vote, those who have no right to, thereby destroying the rights of law-abiding Americans.

The U.S. presidential elections held November 8, 2016, a victory was gained by Republican Donald trump. In late November he announced a significant fraud during the vote in three States — Virginia, new Hampshire and California. It won the main rival trump is the representative of the Democratic party Hillary Clinton.

Later Josh Ernest, as the official representative of the White house, said that there is no evidence to substantiate claims of fraud in the presidential elections there.