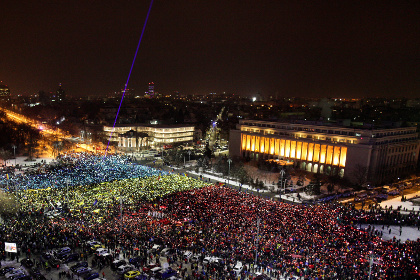 In Romania, tens of thousands of people again took to protest against the government, reports Reuters.

In the capital, Bucharest, in front of the government building gathered on Sunday, February 12, 50 thousand people. At 21:00 (22:00 GMT), they simultaneously raised above the heads of the sheets of paper of red, yellow and blue, thus forming the Romanian flag.

In other cities of the country and abroad protested in tens of thousands.

Previously, the Romanian government refused the amendments, which could lead to the release from prison of convicted in corruption cases supporters of the ruling party. However, the protests do not stop.

This wave disturbances — the biggest since December 1989, when it was overthrown by the power of the Communist party led by Nicolae Ceausescu.