Possessed by the devil. The real story of “the Salem witch”

February 8, 1692 a doctor in the city of Salem announced the diagnosis, which began with the story of the trial of “Salem witch”. 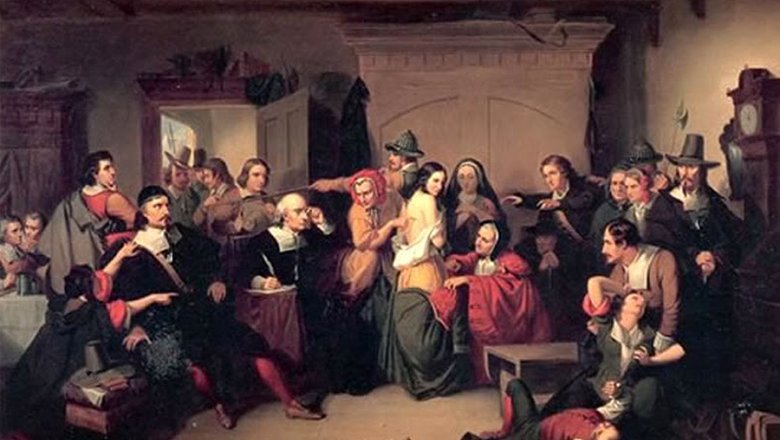 The terrible history of the settlement of the puritans

Today the term “witch hunt” is used most often when talking about the persecution of supporters of political views that are not shared by the majority. But for centuries a “witch hunt” was hunting in the literal sense: awash in religious hysteria, the people sought to destroy those who were suspected of witchcraft.

The victims of such hunting in Western Europe were tens of thousands of people.

Not have passed this Cup and the New world, where one of the most famous and scary stories was the trial of “Salem witch”.

The town of Salem was founded in 1629 by English colonists-the puritans. Salem was nothing special among the other settlements of America. The puritans, as the people are deeply and devoutly religious, was inclined to consider various disasters — crop failures, epidemics, attacks by Indians — from the devil’s henchmen. Such were the people involved in witchcraft.

To witchcraft the attitude was extremely serious: in 1641 for he had legislated the death penalty.

A half-century Salem did not recall such a penalty for the wizards, while in 1692 had not happened events that subsequently occurred throughout the world.

The diagnosis of “witchcraft”

In January 1692 the daughter and niece of the local pastor, Samuel Parris — nine-year-old Elizabeth Parris and twelve-year-old Abigail Williams was discovered symptoms of an unknown disease. Girls were screaming and making weird noises, hiding under the furniture, their bodies took the unusual poses.

When the pastor tried to read the girls preaching, they plug the ears.

8 Feb 1692 Dr. William Griggs declared that all girls were victims of witchcraft. Their findings doctor relied on the work of cotton Mather “Memorable Providences Relating to Witchcrafts and Possessions”, which describes a similar case that happened in Boston.

The culprit found quickly: in the house of the Perrys served as a slave named Tituba. According to some, she was brought from Barbados. The girls announced that Tituba told them about witchcraft.

Meanwhile, the number of girls with a strange disease increased, to seven. Then the people of Salem came to the conclusion that Tituba did not act alone. 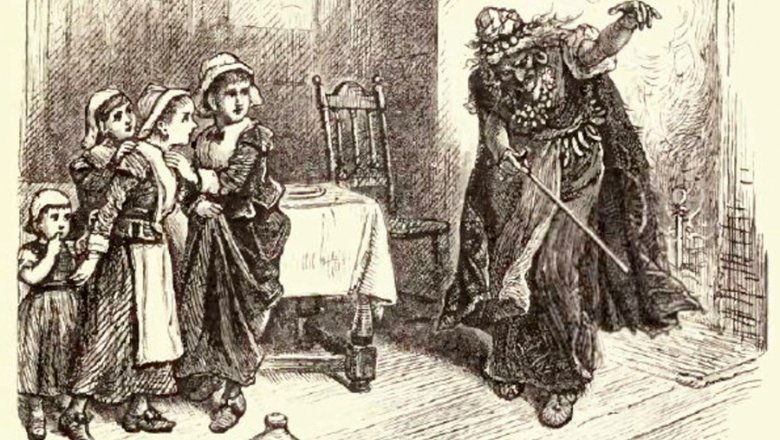 “So we’re all going to have witches and demons”

Affected girls again interrogated, and they pointed to two women: the beggar Sarah good and ill, the widow Sarah Osborn. March 1, 1692, all three women were arrested.

Arrested initially denied everything, but the pressure on them increased. Over Sarah hood held the “investigative experiment”: led of the affected girls and ordered to “witch” to look at them. The girls immediately started to scream and writhe. For judges this was convincing proof of guilt.

The detainees soon became recognized in connection with the devil: in particular, building damage, encounters with a werewolf and flying on broomsticks.

To the credit of the citizens of Salem, among them there were those who from the beginning believed in this story, considering that girls are actually just fake a strange illness.

“If these girls are given the will, so we’re all going to have witches and demons. So we got them tied to a post, and rip as it should,” said one of the residents.

The girls themselves, seeing what was going on, became frightened. Two of them tried to take the testimony back, saying he made it up. But the rest of the “victims” didn’t support them, and themselves “fighters against witches” was ready to suspect witchcraft and repented. Frightened, the girls began to talk again about the fact that they was a-witching him witch, accusing a few people. 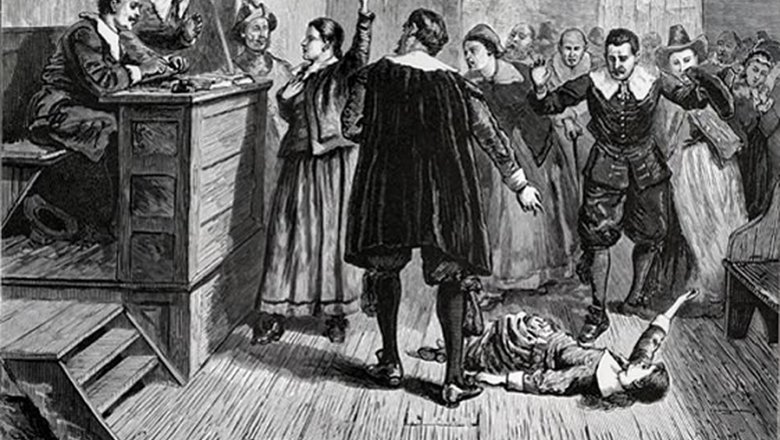 The leader of the forces of evil declared priest

In March 1692 was arrested-year-old daughter of Sarah Goode, Dorothy, Martha Corey, Rebecca nurse, Rachel Clinton. Martha Corey was among those who thought ongoing farce, and it is also considered a sign of involvement in witchcraft.

Little Dorothy hood was just like a mother, for what, at the insistence of the adults agreed to plead witch.

If the first three arrested women did not attend the Church that in the eyes of the puritans made them criminals, the new suspects were diligent parishioners. Among the inhabitants of Salem was split: many felt that the case had already gone too far.

However, the majority was on the side of the prosecution. The investigation lasted. In April of 1692 on accusation of witchcraft were arrested Sarah Klaus, Elizabeth Proctor and her husband, John Proctor, Martha Corey’s husband Giles and a few others.

20 APR 1692 twelve-year-old Anna Putnam stated that she was a “Ghost priest” who has choked and frightened her. She called the priest’s name: George burrows.

George Burroughs was a real person, a respected person. However, detainees who at that time was about 30 people, began to give his testimony. He was accused that he was flying with the girls on the top of the mountain to force them to swear allegiance to the devil, that he organized covens of witches has put a spell on soldiers who suffered defeat by the Indians.

In modern parlance, Burroughs announced the leader of the criminal community. 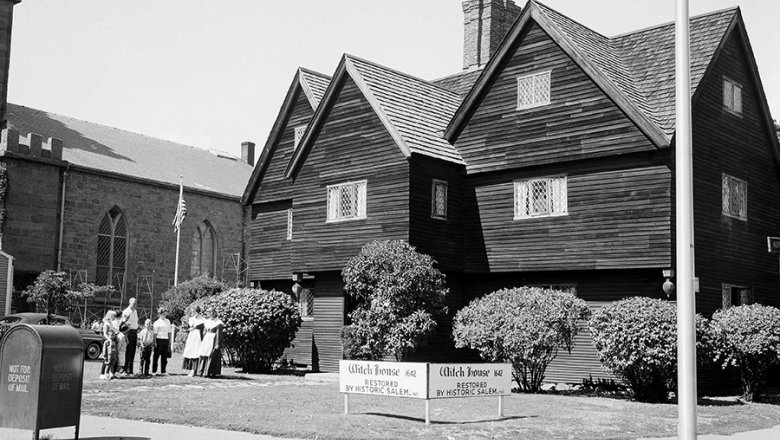 “Our father” under the gallows, and lethal torture

In may of 1692 began the trial of “Salem witch”. Sarah Osborne, not waiting for sentence, may 10, died in prison.

Arguments for the protection of judges were not convinced. June 2 was the first death sentence that was handed down to the elderly woman, Bridget Bishop. She was hanged on June 10. 19 Jul 1692 executed Sarah good, Rebecca nurse and several women.

5 August is the turn of George Burroughs. Standing under the gallows, the priest tried one last time to reason with the townspeople.

He without hesitation said the prayer “our father,” which, according to legend, a sorcerer can not do.

The crowd started to ferment, but the executor of the execution convinced the audience that it’s the devil thus tempted them. George Burroughs was hanged.

September 19 1692 80-year-old farmer Gilles Corey who refused to plead guilty, used “a peine forte et dure”: the torture of the weight. On the chest of Corey laid heavy stones, and he slowly died under their weight. Even from the point of view of the laws of the time the use of such torture was a violation. The torture lasted two days, but the man died without admitting guilt.

The next day his wife, Martha Corey, and 7 people were hanged. 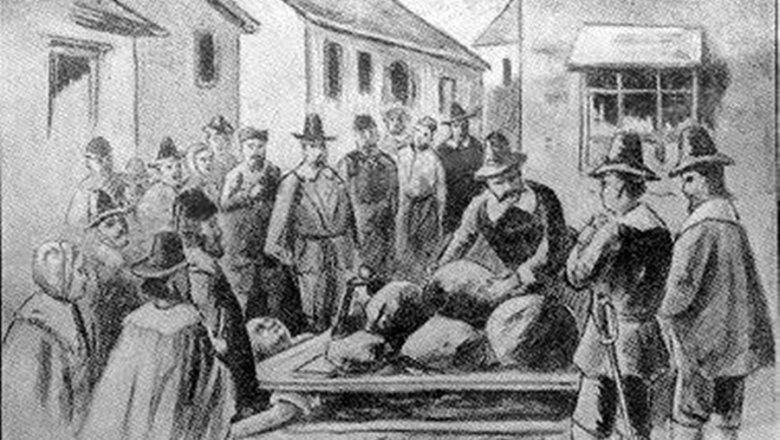 The Governor stopped the execution, afraid for his wife

Mass hysteria began to spread to neighboring towns, where they also began their processes. To expose the witches invited those same girls from Salem.

Meanwhile, the events began to frighten even those who originally initiated the process.

The priests said that the vision of the victims as evidence cannot be used because it can be the devil to discredit the innocent.

Massachusetts Governor William Phipps, initially gave the nod to the witch trial, imposed a ban first on the imposition of the death penalty, and then on the new arrests.

According to some, he did it for personal reasons: the girls are accused of witchcraft by his own wife.

From custody was released 28 people, and to deal with the case remaining five was formed by the Supreme court of Massachusetts. In may of 1693 all the remaining defendants in the case “Salem witch” was released.

It is time to take stock. 19 people were hanged, one died under torture, up to five people, according to various sources, died in prison, but only after the conclusion went from 150 to 200 people. The four-year Dorothy hood has been in prison for eight months and lost her mother.

In 1697 it was announced that the process was a judicial error, and in 1702 the court’s decision was recognized as illegal.

14 years later Anne Putnam, sent to the gallows George Burroughs, wrote a letter of repentance: “I desire to repent before God for that sad and mournful role as Providence befell my father’s family in 1692.

That I was a child and cited the will of the Lord to become an instrument of the prosecution of several people in a serious crime, they lost their lives, but now I have every reason to believe that those people were not guilty.

At that sad time satanic delusion has deceived me, and I fear that along with the other has become, albeit without any malice or intent on my part, an instrument in the hands of others, brought upon her head and on the heads of my people the curse of innocent blood spilled. Honestly and directly before God and the people declare that everything I have said or done then, was said and done not out of malice or animosity towards anyone, for neither of them to whom I have such feelings harbored, but the only ignorance in the result of satanic delusion.

For this reason, I wish to prostrate and beg forgiveness from the Lord and all those who I caused so much offence and grief of those whose relatives suffered from the accusations.

For three hundred years that have passed since these events were put out dozens of versions of what could be the cause of all this. Assumed and the mass poisoning of girls that caused hallucinations, and Huntington’s disease, is striking the nervous system, and encephalitis. Someone insisted that the girls really just overworked.

However, none of these reasons could be fatal, if not for the atmosphere of the society at that time, where mass psychosis that turned into a witch hunt, was commonplace.

The girls were waiting for the bitter fate. Surrounding them were simply afraid, trying to stay away. Only one, according to reports, was able to marry and start a family.

In 1711 all the victims in law has restored civil rights, returned a good name is executed. Their families were compensated.

In 1752 the authorities of Salem have decided to continue to live with such a bad reputation it is impossible, and the city was renamed Danvers.

This, incidentally, leads to confusion, because in the United States today there is the town of Salem, the “witch’s business” has nothing to do with.

In 1992, 300 years after the process at the “Salem witches”, the Danvers memorial was unveiled in memory of those who have become victims of this history.