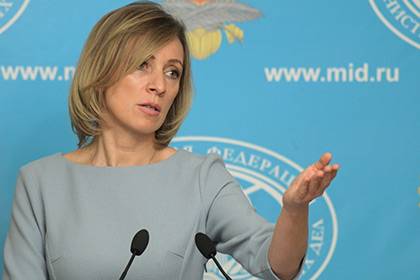 Official statements from the Russian side about the US sanctions will be made on Friday, December 30. About this in his Facebook announced the Director of the Department of information and press of the foreign Ministry Maria Zakharova. “Tomorrow will be official statements, countermeasures, and much”, — she wrote in a post entitled Obama’s Coming Out (“Coming out of Obama”).

According to Zakharova, the outgoing American administration is “a group of foreign losers, angry and narrow-minded”, and President Barack Obama officially admitted. “Today America, the American people were humiliated by their own President. Not international terrorists, not enemy troops. This time a slap in the face to Washington was caused by his host, maximizing the number of urgent cases to the incoming team,” she said.

“And not being able to write the history of the presidency has no achievements in the international arena, Nobel laureate managed to put the elegant point is a fat BLOB!,” wrote Zakharov.

While Zakharova expressed condolences to Secretary of state John Kerry, who “tried to be professional and to preserve human dignity”, “and over it four years, mocked by his colleagues, was framed and was not allowed to work.” “You did everything possible to prevent collapse of the foreign policy of Your country. But as they say in one Russian proverb, whip Obama does not destruct”, she said.

Thursday, 29 December, Obama announced the introduction of new anti-Russian sanctions against the FSB, the GRU, other organizations and six individuals, citing the cyber attacks on the electoral system of the United States from Russia.