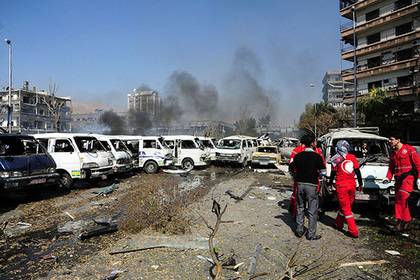 On the territory of the Russian Embassy in Syria dropped two mines. For clearance of unexploded ordnance were brought engineers. This was stated on Wednesday, December 28, comments of the Department of information and press of the Russian foreign Ministry, posted on the Agency’s website.

“We have to say preserving a real threat to the Russian Embassy and his staff from the terrorist groups entrenched in the suburbs of Damascus. This confirms the urgent need for the speedy elimination of such terrorist hotbeds”, — stated in the message.

The foreign Ministry also said that the repeated shelling of the Russian Embassy needs to receive appropriate assessment and “to be categorically condemned by all who oppose the challenges and threats of terrorism.”

Before the Russian Embassy in Damascus was attacked several times. So, on 28 October on the territory of the diplomatic mission were dropped two mines. No one was hurt, but the Embassy was damaged.

Two weeks before that, the building of the Russian diplomatic mission in the Syrian capital also came under mortar fire. One of the mines exploded in the vicinity of the outer guard post, and another near the entrance to the consular section, two mortar shells detonated a few hundred meters from the fence of the Embassy.