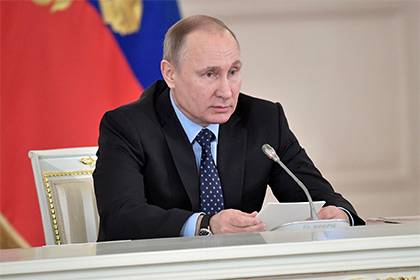 Russia is able to cope with any emerging difficulties before it, said the President of Russia Vladimir Putin at traditional new year reception in the Kremlin on Wednesday, December 28, reports TASS.

“No one can cause us such problems that we would not be able to overcome, the main thing that we are working successfully”, — said the head of state.

At the reception, the President raised a toast to Russia and the Russian people, and also wished everyone present success in the coming year.

Earlier on Wednesday it became known that the head of state changed the format of the festive evening in the Kremlin because of the accident of the airplane Tu-154 of the Ministry of defense crashed in the Black sea. The President stressed that after the incident, the trick is to wear working nature.

On their way to Syria Tu-154 Russian defense Ministry fell into the Black sea shortly after taking off from airport Sochi (here, the Board, EN route from Moscow Chkalovsky, landed for refueling). Killing 92 people. Currently, investigators are considering several main versions of the disaster.