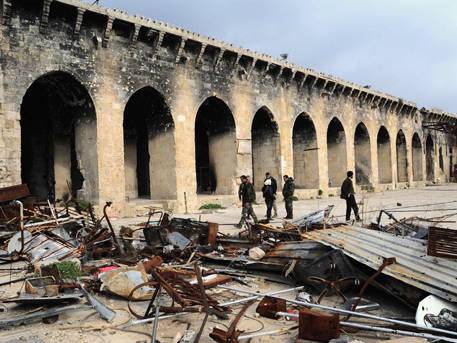 Russian soldiers international mine action centre have demined more than 966 hectares of land in Eastern Aleppo , as reported by the Russian centre of reconciliation of the warring parties in Syria. Work carried out since the fifth of December.

Cleared over 350 kilometres of roads, more than two thousand buildings, cleared about 15 thousand explosive devices. In addition, the engineers have secured dozens of socially significant buildings, including hospitals, schools and clinics. Only for last days the specialists cleared from explosive objects nine mosques, four schools and one kindergarten.

“From explosive ordnance cleared of about 350 kilometers of roads 2149 and buildings (of which 111 are socially significant), including 44 schools, 38 mosques, 10 hospitals and clinics, two kindergartens, three water intake station, two power plants, one water treatment plant, and one bakery”, – is spoken in the message Center.

Earlier it became known that the Syrian army East of Aleppo captured immense military stores of terrorists. According to military experts, the value of captured weapons and ammunition is estimated at hundreds of millions of dollars.