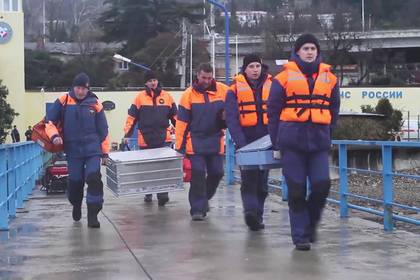 At the crash site of Tu-154 of the Ministry of defense in the Black sea discovered more than 1.5 thousands of fragments of the fallen plane. On Wednesday, December 28, reports TASS citing a source in law enforcement bodies.

“During the search operation discovered in 1547 fragments and wreckage of the aircraft,” — said the source. According to him, about a third of them — 567 — brought to the surface. Two on-Board recorder located in the tail of the plane has not been found yet.

Earlier on Wednesday it became known that the rescuers found in the Black sea in Sochi three more bodies of the victims. Thus, the total number of bodies found has risen to 15.

On 27 December it was reported that in the Black sea over a length of 200 meters found a large accumulation of debris of wrecked aircraft, and parts. In the security agencies said that among others was found a large chip with a length of over 60 meters. Also rescuers found the system of the radar identification “friend or foe”.

On Tuesday it became known that experts have deciphered the record of the cockpit voice recorder of the Tu-154. The conversation in the cockpit is interrupted by the exclamation: “Flaps, bitch!” After that are the words: “Commander, fall!”. Work with the second, parametric, recorder not yet started.

The main working versions of the disaster remain: getting into the engine foreign objects; poor quality fuel that caused a loss of power and the refusal of work of engines; piloting error, technical malfunction of the plane.

Tu-154B-2, owned 223-rd flight unit of the Ministry of defense, followed in the Syrian Latakia. December 25, he flew from the airfield near Moscow Chkalovsky and landed in Sochi for refueling. Shortly after the second takeoff, the plane crashed into the sea. 92 people were killed: 84 passengers and eight crew members.

On Board the ship were the artists of the song and dance ensemble of the Alexandrov, including Director Valery Khalilov, the crew of three TV channels, military and several others, including the Executive Director of the charitable organization “Fair help” Elizabeth Glinka, known as Dr. Lisa, and the head of the Department of culture Ministry of defence Anton Gubankova.