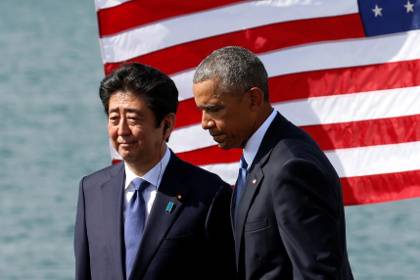 President Barack Obama called the visit of Prime Minister of Japan Shinzo Abe in Hawaiian pearl Harbor “historic gesture” that shows the power of reconciliation. Reported by the Associated Press.

Obama, who is performing at the Hawaii Christmas vacation, gave a speech at pearl Harbor, along with Abe. This is the first such joint visit of the American and Japanese leaders.

According to Obama, the presence of Abe is a reminder of the opportunities that can gain the country and the people. It shows that war can end, and enemies can become allies, said the President. Obama said that relations between the US and Japan are currently the “cornerstone of peace around the world.” This Alliance has never been so strong, he said.

In turn, Abe brought “warm and unfading” condolences in connection with death of American servicemen in the bombing of the base, the Japanese air force in 1941. Both leaders came to the memorial to those who died, laid wreaths and threw into the water the petals.

In may of this year, Obama became the first sitting us President to visit Hiroshima, which the US air force dropped an atomic bomb on 6 August 1945. The attack killed about 80 thousand people. He called to rethink the legacy of the nuclear bombings of Hiroshima and Nagasaki, however, did not apologize or reconsider the statement about whether the dropping of the bomb.

7 December 1941, Japanese aircraft made a surprise attack on the main base of the American fleet in the Pacific — pearl Harbor. The result sank four American battleships and as many suffered injuries. Were sunk or damaged three cruisers, three destroyers, one minelayer, destroyed 272 planes, almost 2.5 thousand people were killed or died of wounds. The Japanese lost 29 aircraft, with 64 people dead and one prisoner.