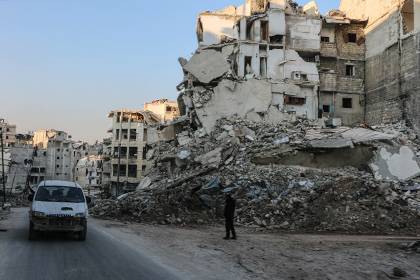 The Minister of foreign Affairs of Russia Sergey Lavrov stated about the inadmissibility of spreading false information on the part of individual UN officials on the humanitarian situation in Syria. He said this during a telephone conversation with the special representative of the international organization for Syria Staffan de Mistura, reported on the Russian MFA website.

Lavrov called unacceptable actions of some officials of humanitarian UN agencies who prey on the suffering of the people to foment anti-government rhetoric. The head of the Russian foreign Ministry demanded to immediately stop this practice.

“The relevant services of the UN Secretariat and incite them to some members of the UN security Council instead of trying to make unilateral judgments about the situation of civilians in Aleppo have to connect to the actual delivery of humanitarian aid in this and other areas of Syria, than for a long time do the employees of the Russian center for reconciliation of the warring parties (…)”, — stated in the message.

On 27 December the official representative the Ministry of foreign Affairs Maria Zakharova said the statement of the head of the British foreign office that the UN can’t get in Eastern Aleppo. “At the moment the city has about 100 representatives of the UN, and 30 of them are in the Eastern part”, — concluded the diplomat.