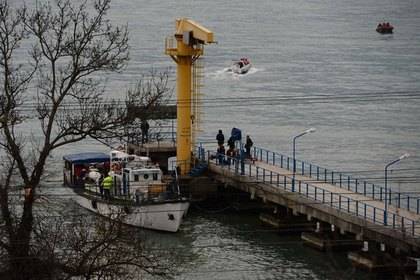 An eyewitness of the crash of Tu-154 Russian defense Ministry near Sochi, told about the details of the crash, noting that the crew like he was trying to land the plane on water. About it writes “Kommersant” with reference to sources close to the investigation.

A witness to the incident, according to the newspaper, was a member of the coast guard border troops of the FSB, which was at the time of the incident on the boat in the waters of Sochi. He said that the plane departed from the airport of Adler, instead of climb began to decline rapidly to the sea surface, as if he was going to make him fit.

The border guard noted that the position of the Tu-154 in the air struck him as odd even for landing because the plane was flying with unnaturally cocked nose, like a motorcycle, put on the rear wheel. After a moment, the plane, according to him, touched the surface of the sea by the tail, which came off upon impact, and then fell into the water and quickly sank.

Experts, commenting on the “Kommersant” described the picture of the incident suggested that the crash was somehow connected with the actions of the crew. According to them, the plane began to lose speed and altitude due to pilot error, too vigorously trying to raise the car. The result of the Tu-154 could be at supercritical angles of attack, which led to the loss of speed the lifting force of the wings and subsequent decline of the liner.

As the newspaper notes, in similar circumstances in August 2006 near Donetsk crashed Tu-154 of airline “Russia” EN route from Anapa to St. Petersburg. The commander of the crew, trying to rise above the storm fronts, made mistakes that led to the stalling of the aircraft from a height of 12 thousand meters.

Earlier, a source in law enforcement agencies told TASS that the destruction of the tail of the plane Tu-154, is removed from the water, indicate that the crew tried to land the plane in the water.

That established eyewitnesses of the crash of Tu-154 in the Black sea, on the 26th of December, said the press service of the FSB. Furthermore, the record of the video recorder that captured the moment of the crash.

Tu-154B-2 Russian defense Ministry crashed on the morning of 25 December shortly after taking off from Sochi, where he landed to refuel. The plane was heading to Latakia (Syria). The disaster killed all 92 people aboard: eight crew members and 84 passengers — the Alexandrov ensemble, led by artistic Director Valery Khalilov, the journalists of the three channels, the representative of the charitable organization, soldiers and officials. The investigation is considering four main versions of the disaster.