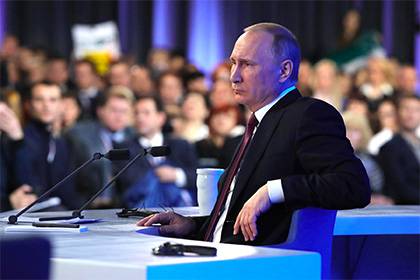 During the big press conference of Vladimir Putin journalist Vladimir Gusev from the Agency “Notepad” asked what his mistake the head of state believes the biggest during presidential terms. About it the correspondent “Tapes.ru”.

Putin noted that such questions he has already asked many times, and added that everyone makes mistakes, without it “no man lives and works.”

“I will try to learn from all their mistakes, flaws, however, make them smaller in the future, so that we worked together, and I including, more effective,” he concluded.

Putin takes the highest state post in 2012, was previously the President of the government, which led in 2008 To the Cabinet it came after two presidential terms.

The next presidential elections will be held in 2018. The elected leader will hold office for six years. Putin has the right to run, but has not yet decided whether to participate.