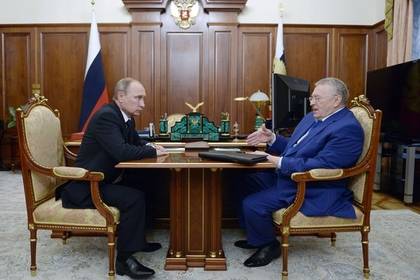 Russian President Vladimir Putin said that sometimes reads a brochure of the liberal democratic party leader Vladimir Zhirinovsky and find interesting ideas. He said this on Wednesday, December 21, during the meeting with the Federal Assembly, reports TASS.

“There are good thoughts. Both the spiritual and organizational”, — said the head of state. Putin also recalled that in the early 2000s, Zhirinovsky put forward the idea, which later “was implemented in the form of Federal districts”.

On December 21, the Kremlin held the meeting of Putin with representatives of the chambers of the Russian Parliament. Been affected by various issues, including changes in laws, simplification of obtaining citizenship of the Russian Federation, the excise tax on alcohol means and tobacco, as well as the fight against terrorism.

At the end of the meeting, Putin invited representatives of the Federal Assembly to celebrate the end of the year champagne. “Come on then, let’s go, people say,” he said.