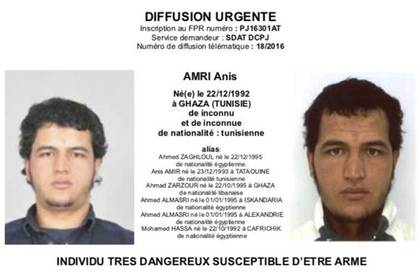 The suspect in the terrorist attack in Berlin Anis Amri few months he was under observation of intelligence services of Germany. On Wednesday, December 21, reports Spiegel Online.

Amri was born in Tunisia in 1992, in Germany, he arrived in July 2015. Some time later, he came into the view of law enforcement. The first record of him, according to the publication, appeared in February of this year. Intelligence services suspected him of having links with an international terrorist group “Islamic state” (IG, is prohibited in Russia). Against 24-year-old men were encouraged to establish “intensive control”.

In the spring of Amri was in the files as the “instigator” in respect of this category of persons necessary to carry out regular inspections. All under the control of the Ministry of internal Affairs are 549 people.

Mainly Tunisian, lived in Berlin, but the last time he went to the territory of the Federal state of North Rhine — Westphalia. In addition, in March 2016 received information about the one that Amri had planned to commit a robbery to acquire arms. Subsequently, these data were not confirmed.

In June, Amri denied asylum, however, the German authorities are unable to deport him to his homeland, as he had no identity documents. Tunisia, as noted, has long refused to recognize him as their citizen.

December 21, the police announced a Tunisian in search for information about it declared the award in 100 thousand euros. During the inspection of the cab of the truck rammed the crowd at the Christmas fair, under the driver’s seat was discovered the documents in the name Anisa A., born in 1992. Also, according to law enforcement agencies, he had some ID. As noted, the executor of the terrorist act might be injured.

19 December in Berlin, the truck made impact on visitors to new year street Bazaar. Ran her ran away. During the incident in the cab of the truck was another man, he died. The victims were 12 people, 48 were wounded. The German authorities acknowledged the incident a terrorist attack.