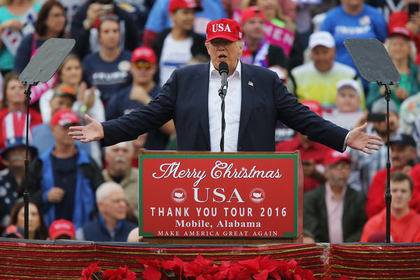 The administration elected President of the United States Donald trump is not included in the list of major threats to the national security of the United States. It is reported by Foreign Policy (FP) with reference to the document, which appeared in a publication.

In the list, listing the defense priorities of the new administration, the fight against the terrorist group “Islamic state” (IG, is prohibited in Russia), development of new cybersecurity strategies, as well as reducing the budget deficit. In addition, the document mentions briefings with representatives of the Pentagon on China and North Korea.

Analytical note, as noted by FP, was prepared in accordance with the rating policy priority of the future authority in the field of security. The list of threats according to their priority has been given to the Pentagon by one of the representatives of the transition team trump.

A source in the administration of the elected President of the United States refused to comment on the presence or absence of Russia in the list of major threats, noting that the note is “not exhaustive”. The Pentagon also did not answer questions about the future policy priorities of the administration, noting that the transition team informed about the situation in the relations with Moscow.

Senior us officials have repeatedly described Russia as a major threat to the United States. In particular, three times about this said Secretary of the air force Deborah Lee James.

In July 2015, the Pentagon released a new national military strategy of the United States. Concerning Russia, stating that the country contributes to the international fight against narcotics and terrorism. However, the Armed forces of the Russian Federation, stated in the document, undermine security in the region directly or through intermediaries.

In the Kremlin the image of Russia called biased. According to the press Secretary of Russian President Dmitry Peskov, it does not promote “all attempts to steer bilateral relations in the direction of normalization”.