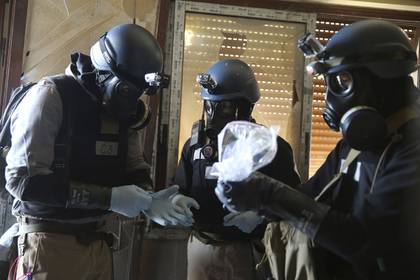 Syrian authorities handed over to representatives of the international mission of the Organization for the prohibition of chemical weapons (OPCW) documentary evidence that the militants had used mustard gas in the province of Aleppo. As transfers RIA Novosti, on Sunday, December 18, reported the official representative of the national authority Syria on the implementation of the Convention on the prohibition of chemical weapons Samer Abbas.

According to him, the mission was revised and adopted documents. “The mission once again come to Syria to collect samples that are subsequently analyzed,” he added, specifying that the samples are sealed and left on responsible storage to the Syrian side, until, until you have sought the Finance to send them on a Charter flight to the Hague. It is assumed that this can be done in January 2017.

The mission of the OPCW statement by Abbas has not yet commented.

On December 12, the mission, consisting of eight experts from the US, UK, Australia, Slovakia and Slovenia worked in Damascus at the official request of the authorities of the Republic.

Earlier it was reported about the application in September were filled with mustard gas 240-millimeter mortar shells residential neighborhoods of the settlement Marret-Umm-Haouch, district of Afrin, Aleppo province. The specialists of the Ministry of defense of Russia have gathered evidence of this fact and handed them over to the Syrian side.

Mustard (or mustard gas) is a chemical compound with the formula S(CH2CH2Cl)2, a chemical warfare agent blister and cytotoxic effect. Affects the mucous membranes of eyes, nose, throat and upper respiratory tract even at low concentrations, but at higher, in addition to local lesions, there is a General poisoning of the body. Contact with eyes can cause blindness, with the skin to cause abscesses in the gastrointestinal tract — a sharp pain in the stomach, salivation, nausea, vomiting and diarrhea (sometimes with blood).