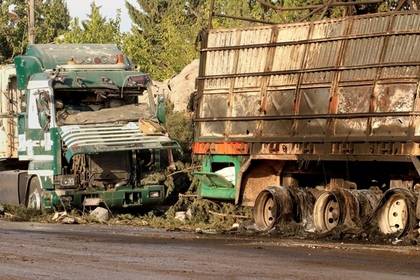 The UN Commission has completed the investigation into the attack on a humanitarian convoy in Syria in September and handed over a confidential report with conclusions to the study Secretary-General ban Ki-moon. It is reported TASS with reference to the press service of the world organization of the statement.

As noted, ban Ki-moon “very carefully” study the document in the coming days. “We have to figure out what happened, for the victims of this incident and their courageous colleagues who every day risk their lives to help those in need. The only way to learn from this incident and to help prevent its repetition,” — said in a communique.

Ban Ki-moon in late September ordered the creation of a special Commission to investigate the incident. In October, the official representative has informed journalists that the government of Syria has promised to cooperate with investigators. In early December, the experts were allowed into the country.

Humanitarian convoy of the UN and the Syrian red Crescent Society came under attack in Aleppo on the night of 20 September. Killed at least 18 people. In the United States indicated involvement in the attack of Russian aviation. Moscow has rejected the charges, and the Minister of foreign Affairs of Russia Sergey Lavrov called for a thorough and impartial investigation into the attack.