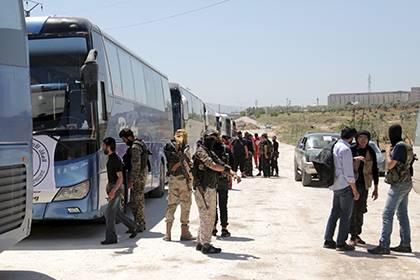 The militants of the terrorist group “Jabhat Fatah al-sham” (formerly known as “Jabhat EN-Nusra”, banned in Russia) agreed to the evacuation of the wounded from the besieged Syrian cities of Foix and Kefraya in Idlib province. On Friday, 16 December, Reuters reported, citing a source.

It is noted that the evacuation may start in the near future.

The Governor of the Syrian province of Hama said that just for the transport of persons sent 29 trucks and ambulances, said RIA Novosti.

More than three years Foix, Kefraya, inhabited by about 20 thousand people, are under siege of the militants “Jabhat EN-Nusra.”

Previously, on 16 December it became known that all areas of Eastern Aleppo released. At the Russian Centre of reconciliation of the warring parties announced that the operation to withdraw from the Eastern districts of Aleppo of the militants and their family members completed. In total areas, which is controlled by terrorists, exported 9.5 thousand people, including 4,5 thousand fighters.

Aleppo is one of the largest cities in Syria. In 2012, the Eastern part seized various Islamist and rebel groups, and the West remained under the control of the Syrian army. In mid-December of 2016, Syrian troops regained control of the city.