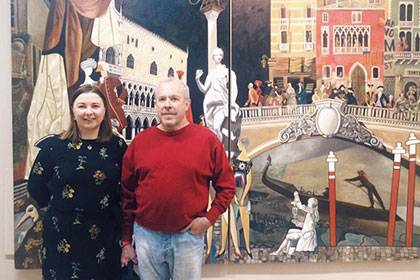 Andrey Makarevich during a visit to the Museum

Mayor of Yekaterinburg Yevgeny Roizman gave a tour of the local Museum of fine arts for the leader of group “the time Machine” Andrei Makarevich. About it reports “Komsomolskaya Pravda — Ekaterinburg” on Friday, December 16.

According to the mayor, Makarevich went to the exhibition of works of the Ural artist Misha Brusilovsky straight from the airport. “About the exhibition Brusilovsky, he said: “Incredibly, very high level.” Tomorrow will give Andrew an album with the works of Misha Shaevich,” said Roizman.

The musician, who is the head of Yekaterinburg called his old friend, gave Roizman “his picture with the fish.” According to the newspaper, the mayor attended the concert “time Machine”, which will take place in Yekaterinburg on Friday evening.

In October Roizman gave a tour of the Museum of Nevyansk icon for the leader of the music group “Leningrad” Sergey Shnurov. Musician he described as “thoughtful, serious, totally normal, positive guy.”

In February, the concert “time Machine” in Yekaterinburg was cancelled. Makarevich argued that the order gave the presidential envoy in the Urals Federal district Igor Kholmanskikh. Roizman questioned the involvement of the Ambassador to the disruption of the concert, but promised to help the musician.

Honorary academician of the Russian Academy of arts, Misha Brusilovsky (1931-2016) became famous thanks to the film “1918”, written in collaboration with Gennady Mosin. In the Soviet period several of his works have been recognized as harmful for the state. The works of Brusilovsky now stored in many museums and galleries in Russia and in private collections around the world. In 2006, the oldest in the world, Sotheby’s auction of his painting “Football” was sold for 108 thousand pounds.