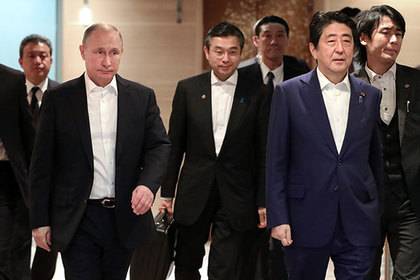 Russian President Vladimir Putin and Japanese Prime Minister Shinzo Abe has cancelled planned for the first day of negotiations and visits to thermal spas. About this he wrote on Twitter journalist of “Komsomolskaya Pravda” Dmitry Smirnov on Thursday, December 15.

“Decided Putin and Abe to refrain from visiting the thermal springs: midnight in Nagato, too late to swim,” explained the journalist.

At 10 PM in Tokyo (16:00 GMT) the leaders of the two countries went to dinner. Negotiations with Ministers over an hour and a half, says Smirnov.

Earlier Thursday it was reported that Putin and Abe will dine Japanese beef, grilled and sashimi of puffer fish and fugu tempura.

It was assumed that after that they will continue to communicate in their outdoor hot spring bath overlooking the Japanese garden and then headed to the Observatory.

The second part of the talks between Putin and Abe scheduled for Friday, December 16, and is expected to be held in Tokyo.