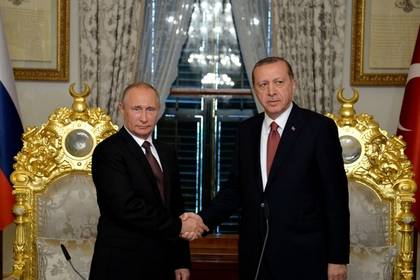 Russian President Vladimir Putin discussed during a telephone conversation with Turkish counterpart Recep Tayyip Erdogan the situation in the Syrian city of Aleppo. About it reports on Wednesday, 14 December, the press service of the Kremlin.

“They stressed the need for joint efforts to improve the humanitarian situation, promoting the launch of a real political process in Syria”, — is spoken in the message.

In addition, the sides discussed issues of Russian-Turkish cooperation, including the energy sector.

Putin once again expressed condolences to Erdogan in connection with the terrorist attack in Istanbul on 10 December, in which 44 people were killed and 155 were wounded. “Confirmed the readiness to continue active cooperation to neutralize the terrorist threat in the middle East”, — noted in a press-service of the Kremlin.

According to the Anadolu news Agency, citing sources in the presidential administration of Turkey, the parties agreed on the necessity of implementation of agreements on ceasefire in Aleppo and stressed the need for evacuation through the humanitarian corridors, civilians and militants. Erdogan expressed readiness to provide humanitarian assistance to the refugees and to provide them with temporary shelter.

On Wednesday at the Russian Centre of reconciliation of the warring parties reported that militants blocked in Aleppo, regrouped and tried to break out of the city. Earlier in the night on 14 December, the Syrian authorities announced a ceasefire in Aleppo and a peaceful solution blocked the city’s militants and their families.

Turkey and Russia are in constant consultations on resolving the Syrian crisis between the two leaders held telephone talks, in early December with a visit arrived the Minister of foreign Affairs of the Russian Federation Sergey Lavrov.