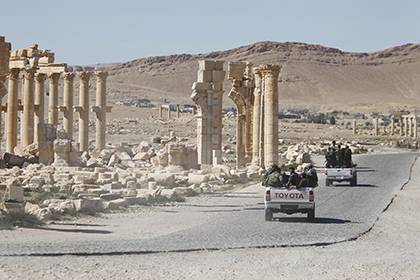 The militants of the terrorist group “Islamic state” (IG, is prohibited in Russia), capturing the Syrian city of Palmyra, continued movement to the West. About it reports the edition “al-Masdar”.

Army units have been strengthened to the West of the city. The safety of the defensive perimeter provides “Calamansi shield”: the tribal units of government troops, awaiting reinforcements from the regular units. Government forces are examining the possibility of a counterattack, but a thousand soldiers had about five thousand militants.

According to the publication, the command has two options: apply a lightning counterattack, not allowing the enemy to gain a foothold in the conquered city and undermine the outskirts, or to start a gradual takeover of the surrounding Palmyra heights, allowing Russian pilots and Syrian artillery strikes on militants inside the village.

However, any successful counter-attack, according to “al-Masdar”, will require the transfer of the most capable units of the Syrian army from the city of Aleppo, for which there is a battle with rebel forces.

11 December it became known that terrorists have established full control over the Syrian city of Tadmor, on the outskirts of which are the ruins of Palmyra. Later Talal al-Barazi, Governor of HOMS province, confirmed that the Syrian army left Palmyra, yielding the position of the IG, adding that government forces fighting the terrorists on the outskirts of the city.

In March 2016 the Armed forces of Syria with the support of videoconferencing Palmyra freed from is militants. During the period of occupation many cultural sites of the city, included in the register of UNESCO world heritage, was severely damaged. In particular, the terrorists completely looted the national Museum. The retreating rebels have mined the ruins in the clearing was attended by Russian specialists.