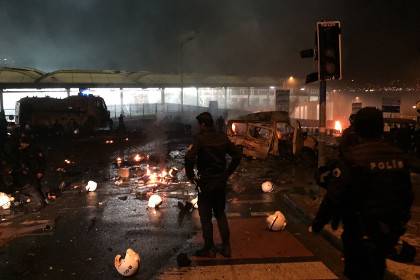 The explosion in Istanbul has killed at least 15 people, reports television channel Al Jazeera Turk. Reuters, in turn, informs citing a source in law enforcement bodies of 13 dead. Official confirmation of this yet.

Hospitalized in a nearby medical facility, according to the channel NTV, 38. Earlier it was reported about 20 wounded.

As stated by the Minister Suleyman Soylu, obviously, two explosions occurred, one of which carried out the suicide bomber, the second, more powerful, has occurred as a result of blasting of the mined car.

About the incident informed the President of Turkey Recep Tayyip Erdogan and Prime Minister Binali Yildirim.

The explosion occurred at 22.30 GMT in the Besiktas district in the city centre, near the stadium Vodafone Arena, two hours after the end of the match between the football teams “Besiktas” and “Bursaspor”.

According to preliminary data, injured many soldiers of the Turkish special forces police. Possible purpose of the attack — police bus.

As reported by RIA Novosti the Russian Consulate General in Istanbul, information about Russian nationals who might be hurt in the explosion, but their presence in the area is unlikely.

The Minister of internal Affairs of Turkey, Suleyman Soylu said that all the victims in the explosion were police officers.

As reported RIA Novosti, the Consulate General of Russia in Istanbul, information about Russian nationals who might be hurt in the explosion, but their presence in the area is unlikely.