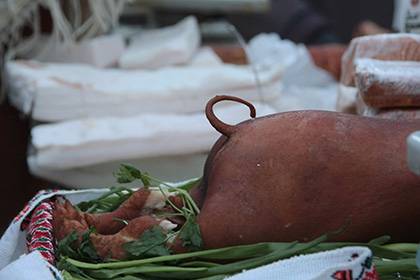 In the Tyumen regional Department of the Federal bailiff service opened a criminal case on a local resident who stabbed and used for personal purposes was arrested by the bailiffs pig. This is stated on the website of the division on Friday, December 9.

As reported, a resident of Abatsky district of the Tyumen region owed on the loan at 63 thousand rubles. Pig to be seized in the framework of enforcement proceedings to recover the debt.

“The custodian of the seized property was assigned owe”, — stated in the text. In this case an employee of the Federal bailiff service explained to the woman of the provisions on criminal liability for embezzlement, alienation, concealment or illegal transfer (article 312 of the criminal code).
The suspect faces a fine, compulsory work or imprisonment for up to two years.

In January 2015 a similar incident occurred in the coastal region. There’s also opened a case for a woman who stabbed and ate the arrested police officers pigs. She owed over 300 thousand in child support for his twelve-year-old daughter.