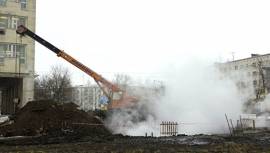 Heat in Kerch restored after the accident on Saturday morning, December 10. This was reported on the website of the main Department of EMERCOM of Russia on Republic of Crimea.

It is noted that in the near future the system will fill with water, this will start the boiler. The incident occurred on a heating main on highway. As a result without heat were more than 15 thousand residents.

Yesterday, 9 December, it was reported another accident on a heating main in Kerch. Then without heat for several hours remained 4.5 thousand people.