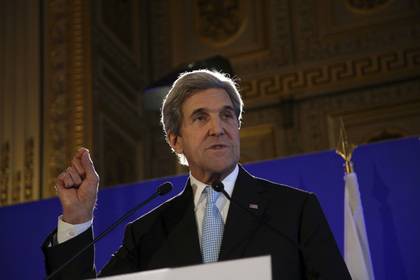 U.S. Secretary of state John Kerry has urged Moscow and Damascus “to show mercy” in relation to representatives of the armed opposition in the Syrian city of Aleppo. The corresponding statement he made on Saturday, December 10, at the last meeting in Paris of the group of friends of Syria, reports TASS.

“We think Russia and [President Bashar] Assad now have preferred to show a little mercy (…) If they really want to start the peace process and to stop this war, they must provide assurances that the people of Aleppo will not go to slaughter” — said the American diplomat.

In his opinion, it would be “simple and direct step” on the part of Russia and Syria, “but that’s difficult.” In addition, Kerry called on the Syrian armed opposition in Aleppo to take a first step towards peace and promised to convey the foreign Minister of Russia Sergey Lavrov, the results of the meeting of the “friends of Syria”.

Previously, on 10 December, the defense Ministry said that the Syrian government forces control of 93 percent of the territory of Aleppo. Agency spokesman Igor Konashenkov also said that for the first half of Saturday from the Eastern districts of the city took more than 20 thousand civilians, about 1.2 thousand militants laid down their arms.

December 5, Lavrov promised that those armed groups who refuse to leave Eastern Aleppo, will be equal to terrorists. The operation to liberate Eastern Aleppo from militants began 21 Nov.