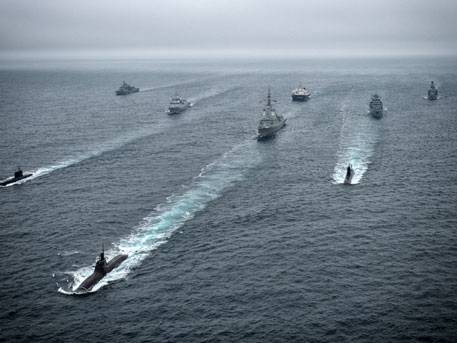 Aircraft carrier group of the Navy of Russia on the way to the Mediterranean sea accompanied by up to eight ships of the NATO countries. In an interview with VGTRK said the commander of the naval fleet Admiral Vladimir Korolev.

According to him, the ship group of the Northern fleet went off on October 15 in the campaign in the North-Eastern Atlantic and the Mediterranean sea. The group included the carrier Admiral Kuznetsov, the heavy nuclear missile cruiser “Pyotr Veliky”, large anti-submarine ships “Severomorsk” and “Vice-Admiral Kulakov” and support vessels.

“Up to eight ships accompanied us with access to the UK. But no violations of international Maritime legislation was not”, – said Korolev.

At the same time commander of the Russian Navy was not surprised by the reaction of NATO.

“We for the first time since the construction of a heavy aviabearing cruiser used our marine aviation in combat. Of course, it calls attention primarily on the part of NATO countries”, – said Korolev.